From the elegant and auspicious website of Mia Katrin, Designer:

“One must speak clearly about clear stones…about ancestral rock…about the emerald’s green fire.” Ron Ringsrud’s passion for the beauty of emeralds is infectious as he quotes Nobel Laureate Pablo Neruda, one of his favorite poets. Ron’s soon-to-be-released Emeralds: A Passionate Guide (available late March through amazon.com) is a labor of love reflecting this passion. It will offer gems of knowledge “known only to connoisseurs and gemologists” as well as “the human side of the emerald world…revealed with all its romance, history, secrets and joy.”

One of today’s premier emerald dealers, Ron has just been elected to the Board of the American Gem Trade Association. “I’ve been a member for 15 years and want to participate more. Many good people are involved and we can bring a lot of progress.”

A high priority on his agenda for progress is the promotion of the Fair Trade Movement. The blockbuster film “Blood Diamond” drew mainstream attention to Africa’s “conflict diamonds”—diamonds used to finance violent, corrupt regimes while exploiting dirt-poor artesanal (small-scale) miners. Today’s Fair Trade Movement reflects the burgeoning awareness of the need for world-wide transparent, ethical sources of production, including social justice—fair wages and a decent standard of living for the artesanal miner.

Regarding mining conditions, “Colombia at its worst is better than Africa at its best,” according to Ron. “The people are poor, but not starving.” The new breed of Colombian mine owners, often young MBAs, reflect a new social consciousness. “They are arranging buses to take the miners’ children to school.” Colombia has come a long way since the seedy “Wild West” days of the early 1980s. “2009 is to be the ‘Big Year of Pride and Progress.’”

Ron’s love for his adopted second “home away from home” is obvious. “Colombians are a spiritual people—poets—the warmest, nicest people you’ll ever meet. The stereotype of the Colombian drug lord actually reflects only the tiniest fraction of the population.”

Ron’s passion for the Land of Emeralds and its people is reflected in his strong commitment to local charities. Two of his favorites are a rehabilitation center for disadvantaged youth founded by a Catholic priest and The National Theater Workshop in Bogota, which trains young people for employment in the theater arts. “My local charity activities have helped me gain a good reputation in the region.”

A cutting-edge development in the new environmental awareness is the idea of “giving back to the land.” In this view, “the Earth is seen not as a resource for consumption, but as a natural, living thing that we should have stewardship over and respect for.” Giving back to the land is an act of appreciation, an offering of thanks. Starting in 2000, Ron participated in a ceremony of emerald industry members in Bogota, sprinkling emeralds onto a tray of earth. Symbolically a gift was being offered back to the Earth for the immense treasures it provides. The experience was so positive, it has been repeated regularly and even expanded to the Colored Gem Show in Tucson AZ.

“Offering back to the Earth is based in ancient traditions,” Ron reveals. Shinto priests in Japan would pray for the souls of the oysters destroyed in the pearl harvest. In Colombia, the native Cogi Indians of the Sierra Nevada believe we suffer sickness and pollution because we neglect to give back to the land. This newest wave of environmental awareness is a revival of ancient cultural roots. Offering thanks completes the circle.

Neruda’s poem “The Emerald,” inspired by a visit to the Colombian Muzo mine, is quoted on Ron’s website (http://emeraldmine.com). “When everything was high…there waited the cold emerald…it was a vigilant eye at heaven’s center…the emerald that looked on…as if it were an ocean-eye…drop of God….” Expressing the awesome beauty of emeralds, the soul of a poet reflects the wisdom of the ages. 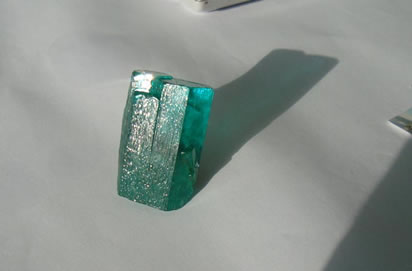 Picture the scene—like something from the old Wild West. As you enter the rough and tumble gem mine in Colombia in the 1980s “every gem mine owner had on his desk a bottle of whiskey, a gun, and a prostitute behind him,” according to Ron Ringsrud, who started visiting during that era. “Today, the mine owner is most likely a young MBA, drinking yogurt, meekly nodding ‘Yes, dear’ to his wife on the phone.” Ron laughs, "Thats an exaggeration, but with some truth to it!"

Rich Colombia is indeed a land of contrasts, ranging from magnificent emeralds—the best in the world—breathtaking scenery and a warm, spiritual people to the seedy underbelly of drug trafficking and cartels.

Ron, recently elected to the Board of Directors of the American Gem Trade Association (AGTA), and with his new book Emeralds: A Passionate Guide about to launch, shared in this exclusive interview how his love affair with this colorful country began.

“I had spent some time living in Colombia right after college and knew some Spanish. Returning home to LA, in need of a job, I serendipitously responded to newspaper ad for a warehouse box mover at GIA (Gemological Institute of America). After three months, they told me I could take GIA courses for free. As I quickly progressed through the courses, I started getting better jobs there—selling tweezers and microscopes.” Soon, Ron had a Graduate Gemologist (GG) degree.

When Ron noticed in a magazine that Colombia had the best emeralds in the world, a spark ignited. “I already had the connections.” His first gem-buying expedition to Colombia was an adventure. “It was 11 hours by jeep from Bogata to the mining district. The hotels had more stray dogs than humans.”

“The mines are very shrouded and closed. The locals want to know who you are, who you know, who you’re with. You don’t enter without their invitation.” Luckily, the locals warmed to this gringo who knew their language and was genuinely interested in developing relationships. He wasn’t there just to buy and leave. He got a few small stones. And so it began.

“The colored stones business is great. Each colored stone has immeasurable qualities—fire, life, transparency and play of color—that make it unique. Arriving at the price of a colored stone requires old-fashioned, low-tech, face-to-face negotiation. This keeps the business lively, charming and very human.”

“The main mines are Muzo, Cosquez, and the newest, La Pita—since 1999 the rising star. La Pita has yielded $100 million a year for five years, suddenly making rich and powerful men out of young miners and investors. New visionary, clear-headed business leaders are emerging, with greater environmental and social awareness.”
Ron has been selling at the annual Tucson show for years (Ronald Ringsrud Co., http://emeraldmine.com). His business took a quantum leap in 1986 when he published his first article in Gems & Gemology magazine on the Cosquez mine. Suddenly he had an established reputation, a different level of clientele. Today a leading industry expert, Ron’s most recent article in Gems & Gemology describes the “gota de aceite” or “butterfly-wing” emerald, a highly prized specimen only found in Colombia.

As a young, single entrepreneur, Ron enjoyed the risks of exploring an edgy, emerging market. Today, as a premier emerald dealer, Ron sells to top dealers and jewelers and provides specimens for collectors. His most expensive sale was a 12 carat stone for $120,000. He sometimes takes his wife Linda and 13 year-old twins to visit this land he loves. “I’m proud to be able to support my wife, a full-time mom, and boys from my profession.”